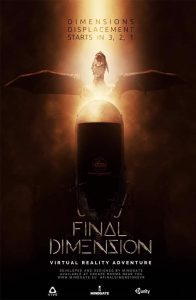 Plot Description : The DBA – Dimensions Bending Agency  possesses  technology that allows 4 agents to instantly travel to any space-time point of the universe, as well as in parallel universes and other dimensions. This technology is highly confidential and under continuous development. It began in the late 1950s and over the years has been refined and stabilized. Now the service has the ability to control such spatio-temporal shifts for about 45 minutes (exactly 44 minutes and 42 seconds). Restrictions are due to the volatile nature of Californium, [98Cf] the key element that makes this type of “travel” possible. Unfortunately, the technology was leaked and several illegal labs on the planet tried to exploit it. Luckily for humanity, Californium is extremely difficult to make. In February 2015, a secret organization stole large amounts of  Californium from the temporary premises of DBA in Geneva with the aim of using it in illegal spatio-temporal shift experiments. However, they were identified in time and several arrests were made, including leading members of the organization.  One of those members though, Ryan E. Dellis, also known as R.E.D, managed to use those “trips” in order to hide the stolen Californium.  Your mission is to follow the traces of R.E.D and retrieve the quantities of Californium he scattered into the Dimensions.